Learn more about BIM and our anchorage systems BIM files for download.

BIM methodology represents a real technological revolution for the production and management chain of the building and infrastructures.

What are the advantages? 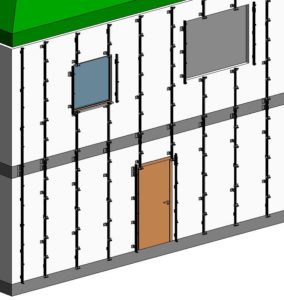 BIM methodology represents a real technological revolution for the production and management chain of the building and infrastructures. This tool allows to build more effectively, reducing time costs, at the same time that allows planners, constructors and other agents involved to work in a more collaborative way.

Other advantage provided by this methodology is the possibility of getting real time information on the area that every participant needs. Then, all the modifications or updated on the project are immediately reflected. This working method avoids mistakes and duplication of plans because everybody is working on a unique version of the project.

Another strong point of BIM with regard to CAD is the interference detection. An interference is when different elements cross or are in the same place. The early identification of these errors in the design phase implies an important time saving, as well as resources and money.

With this new methodology, the design systems based on 2D and 3D plans that only provide geometric information are left behind to make way for another 4 dimensions. 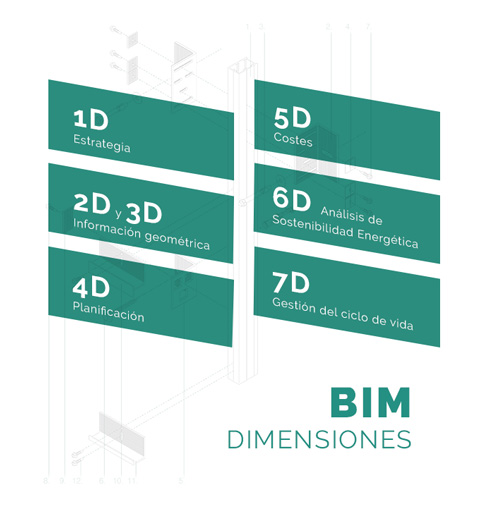 4D Planification: the temporal dimension comes into play and allows to plan in a comprehensive way every phase of the project. It allows to stablish the completion deadlines, considering the logistic of the projects, the material requirements and auxiliary resources at any time. All of this aimed at meeting the stablished deadline.

6D Analysis of the energy sustainability. It deals with the energy performance of all possible alternatives to determine the optimal or most efficient.

7D Life cycle management. This level deals with the management of the building or finished work during its lifespan. It is a guidance or manual to understanding the project quality, referring to inspections, reparations, maintenance, etc. From the owner’s point of view is one of the most important dimensions because it allows to manage the preservation and maintenance costs.

Is it mandatory to use the BIM methodology?

At European level, Directive 2014/24/EU of the European Parliament and of the Council of 26th February 2014 on public procurement and repealing Directive 2004/18/EC, states in Article 22.4 that:

“For public works contracts and design contests, Member States may require the use of specific electronic tools, such as of building information electronic modelling tools or similar”
(referring to the use of BIM tools).

At national level, the Ministry of Public Works decides to take the leadership to introduce this new methodology and, on 14th July 2015, the Commission for implementation of the BIM methodology was stablished. This Commission was stablished to promote the implementation of BIM on the Spanish construction industry, promote its use during the infrastructures lifespan, raise awareness among the public administrations of the establishment of BIM requirements for infrastructure tenders, stablish a schedule for the adaptation of the regulations and their widespread use, develop the national standards that enable their homogeneous use and perform a training academic schedule of this methodology in Spain.

Law 9/2017, of 8th November, of Public Sector Contracts, which transposes Directives of the European Parliament and of the Council 2014/23/UE and 2014/24/UE, of 26th February 2014, refers explicitly to BIM. It sets out in point 6 of the fifteenth additional provision about “Regulations relative to communication methods usable in the procedures regulated by this law”:

“For Public work contracts, work and services concessions, project tendering, and in mixed contracts combining these elements, the contracting authorities may require the use of specific electronic tools, such as digital modelling tools of the building information (BIM) or similar tools”

The Ministry of Public Works has stablished the following dates BIM for the implementation of BIM methodology:

You can download a .zip file with the BIM families for Revit of all of elements that are part of the anchorage systems.

Families have been created specifying the screws required in each type included in the family with the aim of having the exact number of elements necessary in the project. Moreover, a repository with an example of the façade components is included.

These families have been created with Revit 2018, so they must be opened with the same version or later.

Located in Carballo, we install and export the best qualities.

We are a Spanish leading company in the design and manufacturing of anchorage systems for the installation of ventilated façades.